The 20th Anniversary of the Kittery Tobu Exchange!

For even more,  join the Kittery Tobu Kamikita Exchange on Facebook!

May 2012  We had a wonderful visit with our friends from Rokunohe and Oirase! Highlights of this year’s exchange included a trolley tour of the seacoast and visit to the Seacoast Science Center. The John Paul Jones House welcomed our adult guests to see the Portsmouth Peace Treaty Exhibit. Shapleigh School students enjoyed cultural demonstrations and shared musical performances. New friendships were formed and old friendships strengthened over the five days of this year’s exchange. To see pictures of the events, please visit the photos page. Read the Portsmouth Herald’s story of the visit: http://www.seacoastonline.com/articles/20120502-NEWS-205020352?cid=sitesearch

April 2012– Our next exchange will take place April 27 -May 2. We are looking forward to welcoming twelve students and five adults from Rokunohe and Oirase. This year we are honored to have Mayor Yoshida of Rokunohe, and Rokunohe School Superintendent Sakurada among our guests. Other guests include English teacher Hiroaki Uchiyama and TRCE member Teruhito Murakami.

The 16th visit from the students of the Tobu-Kamikita School was a huge success! Our guests arrived  on April 22 and spent five days sharing cultures and building friendships. This year the twelve students were accompanied by Mr. Takeshi Hakamada, Superintendent of Oirase Town Board of Education, Mr. Noboru Sawahashi, Chief of Education at TRCE and Ms. Kaori Hareyama,English teacher of Shimoda Jr. High. The Portsmouth Herald ran a story about the visit:   http://www.seacoastonline.com/articles/20110426-NEWS-104260397?cid=sitesearch

The Kittery Tobu-Kamitika Exchange Committee would like to thank the many students, families, teachers and staff from Shapleigh School in Kittery who helped raise funds for the earthquake and tsunami relief efforts in Aomori, Japan.

Through the sale of a specially designed t-shirts, $500 was donated to the Maine-Aomori Sister State Advisory Council. Those funds and others collected through the Friends of Aomori – Earthquake Relief effort were sent directly to the Aomori official relief agency, Aomori-ken Saigai Taisaku Honbu (Aomori Prefecture Disaster Management Office), for use in assisting earthquake and tsunami victims in the prefecture.

The original artwork on the t-shirt was designed by Flynn Battock Emerson, Kayla Kilty and Hannah Nightingale.

We would also like to thank the talented students that helped make the 1,000 origami cranes that were presented to the Japanese students on April 25 during the welcome assembly at the school. As was explained during the ceremony, 1,000 cranes represent a gift of peace and good luck.

We are pleased to announce Judy Mitsui has accepted the position of President of the Kittery Tobu Exchange. Judy is the wife of  the late Mori Mitsui, the beloved founder and former president of the program. Judy has been actively involved with the exchange since it began 18 years ago. We are thrilled to have her continued support and guidance.

Planning has begun for the April 2011 visit! This year’s dates are April 22 through April 27th. Anyone who is interested in becoming involved should contact Caritha at carithacurti@gmail.com

We are very sad to report that our dear friend Mori Mitsui passed away on August 26th. Mori was the cofounder and president of the Kittery Tobu exchange. His work in support of the program has kept it going for these seventeen years. He will be greatly missed.

We had a wonderful visit from our Japanese friends on June 16th. Mayor Yoshida, Superintendent Hakamada and Chief of Guidance Sawahashi came to honor the 17 year relationship between Kittery and the Tobu Kamikita school districts. Check out the articles from The Portsmouth Herald: http://www.seacoastonline.com/articles/20100618-NEWS-6180414 and Foster’s Daily Democrat: http://www.fosters.com/apps/pbcs.dll/article?AID=/20100617/GJNEWS_01/706179741

We are happy to announce there will be a June 16 visit by a delegation from the towns of our sister schools. Mayor Yoshida of Rokunohe and Superintendent Hakamada of Oirase will visit Kittery along with  Mr. Noboru Sawahashi, the schools’ Chief of Guidance.

The visit is being made in honor of the long standing relationship between our communities. The events of the day will include a renewing of the Sister School Agreement between Shapleigh Middle School and the Tobu Kamikita School District.

Due to concerns about the H1N1 flu, students from the Tobu-Kamikita district will not be visiting this year. Because they  begin preparations for this trip a year in advance, it was decided that the risks at that time were too high to commit to the  visit. The exchange will resume next spring, 2011. 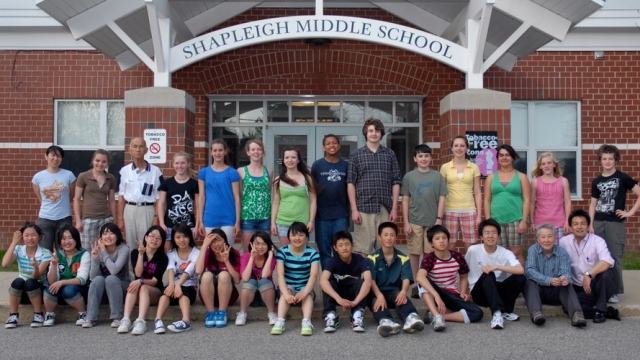 We just completed our 15th exchange with the Tobu-Kamikita school district of Rokunohe and Oirase in Aomori, Japan.

Our guests arrived on Friday, April 25th. The twelve junior high school students and their four chaperones spent the next five days experiencing life with Kittery families- visiting historical sites, trying new foods, attending school and learning about our culture. On their last evening here, the Japanese students prepared a delicious meal of traditional foods for their hosts.

The students were able to overcome language barriers and made strong connections with their host families. There were many tears as goodbyes were said to new friends.

The Portsmouth Herald came to our Sayonara Party and wrote an article about the Kittery-Tobu Exchange.  Read it here online: Japanese or Mainers: kids are kids

For more articles about our exchanges, click on the titles below: